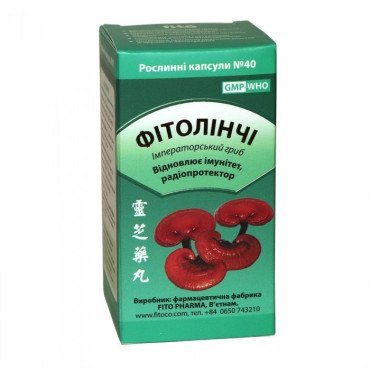 The miraculous properties of the mushroom Lin Chi (Reishi) or Ganoderma lucidum (Latin) have been known in the East since time immemorial. More than 2,000 years ago, in the Holy Book of Miraculous Medicinal Plants (China), the Lin Chi mushroom was named "the best of the 365 most valuable medicinal plants in the East," superior in value to ginseng. Philosopher of the 1st century AD Wang Chang praised it as a plant that enhances spiritual capabilities and cures physical ailments.

The American scientist of the 20th century, a well-known expert in oriental phytotherapy Terry Willard, calls this mushroom "a plant of spiritual potency and astonishment of physicians." In Japan, Lin Chi is included in the official list of anticancer drugs.

The main active ingredient is Lin Chi mushroom or ganoderma. Dried mushroom Lin Chi contains 2.54% polysaccharides, 5% lipids, 17.11% protein and 62.63% fiber, has 0.3% saponins, 1.15% steroids, and a large number of trace elements. Many therapeutic effects of ganoderma are associated with the presence of polysaccharides that have antitumor activity. The effectiveness of prevention and treatment of cancer with the use of ganoderma drugs has been proven.

In addition, the Lin Chi mushroom restores impaired immunity, lowers high blood pressure, strengthens the heart muscle and liver, protects against thrombosis, traps free radicals and prevents the development of atherosclerosis, increases the body's ability to absorb oxygen, protects against diarrhea. , has an anti-allergic effect, improves the work of the endocrine glands, has a calming effect.

The degree of recovery of the damaged immune system, including AIDS and antitumor activity depends on the duration of treatment with Lin Chi.

The use of Lin Chi in the cardiovascular clinic is associated with the ability of triterpene ganoderic acid to reduce the level of substances that contribute to the formation of excess cholesterol in the blood at risk, and this effect is greater the higher the level of hypercholesterolemia. Extracts of this plant improve myocardial contractility while reducing oxygen demand.

Lin Chi has a calming effect on the central nervous system, reduces stress, has antihypertensive and adaptogenic effects.

The plant affects the blood coagulation system, suppressing platelet aggregation, which is due to the presence of large amounts of adenosine in the fruit body. The analgesic effect of the fungus is also associated with adenosine. Lin Chi is used as an auxiliary antidiabetic agent; it enhances and prolongs the action of insulin.

Angelica has a tonic and tonic effect, stimulates the heart, lungs, spleen, liver and kidneys, has a moderate antihypertensive effect, improves blood composition and increases its circulation in the body.

In traditional oriental medicine, the classic recipe FITOLINCHI is used:

It is recommended to be taken as an adjunct to any therapy.

Biologically active additive. Not a medicine.

The aim of the clinical study was to evaluate the effectiveness, safety of the drug "Lin Chi" and to study its effect on the functional state and course of the disease in persons with hepatobiliary pathology in combination therapy.

The study involved 36 patients aged 21 to 64 years who suffered from bile duct dyskinesia, chronic cholecystitis, hepatitis. The average duration of the disease was 10.2 years (1 to 13 years). In 13 of 36 patients (29%) diseases of the hepatobiliary system were detected for the first time, in the remaining 23 (71%) recurrences and complications of the underlying disease were observed. In the study group were observed: chronic hepatitis - 8 cases; chronic cholecystitis - 10 cases; chronic pancreatitis - 9 cases, chronic cholecystocholangitis - 8 cases, Gilbert's disease - 1.

The control group consisted of 22 men with hepatobiliary pathology in whom the drug "Lin Chi" was not used in addition to basic therapy.

The results showed that the use of the drug "Lin Chi" in addition to basic therapy leads to significant positive changes, both during the disease and reduces the bed-day rate in the hospital in patients with the following diagnoses: exacerbation of chronic calculous and non-calculous cholecystitis , which occurred against the background of mixed dyskinesia of the gallbladder and bile duct sphincters, as well as in persons who underwent cholecystectomy for gallstone disease and chronic hepatitis. With chronic persistent hepatitis, the bed-day decreased by 4.2 days.

In patients who, in addition to basic therapy, received drugs "Lin Chi" clinical symptoms began to disappear gradually within 3 to 7 days, only in 4% of cases there were constipation, 10% - appetite disorders, 20% and 25% - disorders sleep and irritability, but these symptoms have been observed in individuals with comorbid conditions such as neurocirculatory dystonia or hypertension.

The use of "Lin Chi" did not cause significant changes in the indicators of the general blood test, which can be considered as the absence of adverse effects of the drug and its side or toxic effects. It should be noted that when prescribing the drug "Lin Chi" there was a decrease in ESR - by 33% compared with 23% - in persons who received only basic therapy. The reduction in the number of leukocytes with the use of Lin Chi was also statistically significant. Laboratory and clinical indicators indicate the disappearance of the general inflammatory process, the phenomena of intoxication, as well as increased detoxification function of the liver and improved metabolic processes. Normalization of biochemical parameters (ALT, AST) indicates an improvement in metabolic processes in the liver at the level of hepatocytes.

The normalization of the functional state of the gallbladder and the sphincter apparatus of the biliary tract is evidenced by instrumental studies performed using ultrasound (ultrasound). Thus, in hypotonic-hypokinetic dyskinesia - the gallbladder decreased from 94 + 7.3 cm to 52 ± 4.5 cm3, and in hypertensive-hyperkinetic - increased from 30 ± 2.1 cm3 to 47 ± 3.2 cm, which is also the positive dynamics of indicators of physical and biochemical properties of bile (bile acids, cholesterol, cholato-cholesterol ratio, specific weight and microscopy results) also testifies.

Analyzing the dynamics of the main indicators of the immune system in patients with chronic hepatobiliary pathology, it should be noted the observed decrease in immune reactivity and immune responses in exacerbation of chronic hepatobiliary pathology (chronic cholecystitis, hepatitis), as evidenced by biochemical parameters such as ALT. Increase in indicators: T-lymphocytes, T-active, E-ROK assumes activation of a thymus-dependent chain of immune system. This indicates the attenuation of the acute inflammatory process and the restoration of immune protection.

Patients with dyspeptic syndrome, the appointment of drugs "Lin Chi" requires a differentiated approach, due to the presence in the extract of a small amount of bitterness and sugars.

Lin Chi has a pronounced immunomodulatory, adaptogenic, hypotensive and hepatoprotective effect. Lin Chi is also characterized by anti-allergic and antioxidant effects. Contained in the drugs "Lin Chi" Ganoderma Lucidum is an effective radioprotector, well tolerated by patients with pancreatohepatobiliary pathology and has no side effects. Lin Chi is compatible with traditional medicines, accelerates the healing process and is recommended for the normalization of metabolic processes in the liver, shown in the rehabilitation period after hepatitis, cholecystitis, pancreatitis, liver and pancreatic surgery.