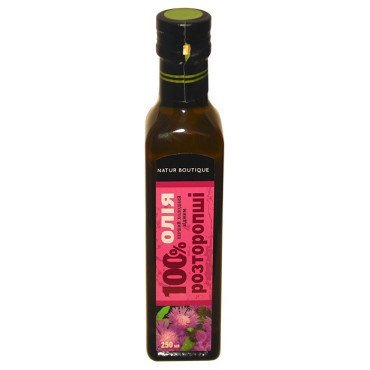 Unrefined and non-deodorized 100% milk thistle oil, produced by the method of the first cold pressing without admixture of other oils.

The unique healing properties of milk thistle, which is what the people call milk thistle, have been known for a long time and are widely used in pharmaceuticals. It is interesting that in many European countries this plant is named after the Virgin Mary. This is primarily due, of course, to the beneficial properties of milk thistle, but the appearance of this plant also played a role. According to legend, the white spots on the leaves of the thistle are nothing more than the milk of the Mother of God. It is not for nothing that in Bulgaria the healing thistle is called “the gift of the Virgin Mary”.

Milk thistle is also unique in that all parts of this plant are used for medicinal purposes. Milk thistle is especially useful for the treatment and prevention of liver diseases. Nevertheless, doctors say that the most useful milk thistle product is oil, because it can be used not only externally, but also internally.

Milk thistle oil is widely used for medicinal purposes. It is recommended for liver diseases, diabetes mellitus, ulcers, diseases of the pancreas, cardiovascular system, skin lesions. Milk thistle oil is advised to be taken during the rehabilitation period after serious illnesses or operations, after undergoing a course of chemotherapy. People living in ecologically polluted areas, or those whose work is related to toxic substances, milk thistle oil is essential. It is also necessary for people who abuse alcohol, since milk thistle oil is able to remove toxins from the body.

Milk thistle oil is widely used in cosmetology. Due to the presence of vitamin E and omega-6 acid in the composition, it perfectly nourishes the skin, protecting it from drying out and flaking, increases firmness and elasticity, improving skin color.

Milk thistle oil is useful for problematic and sensitive skin, as it relieves irritation, protects against allergens, eliminates acne, and regulates the sebaceous glands. It prevents premature aging, protects the skin from the effects of ultraviolet rays, and prevents the appearance of spider veins.

In addition, it strengthens nails and hair, regenerates them, and promotes growth.

Contraindications: Milk thistle oil is not recommended for use in case of individual intolerance to its components. Also, do not use milk thistle oil for people suffering from epilepsy, with increased emotional stress, nervous overexcitation.