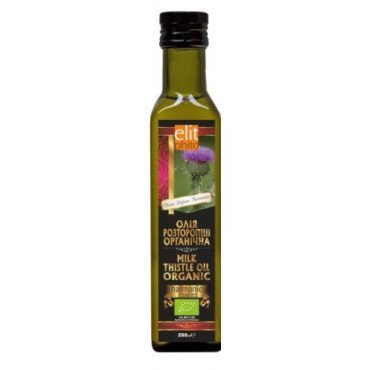 The oil is produced from organically grown seeds on German equipment according to German technologies, meets European food safety requirements (GMP) and is constantly monitored in accredited laboratories of the State Standard and leading institutes of Ukraine and laboratories in Germany.

For a long time, there have been recipes that include milk thistle. Due to its healing properties in folk memory and legends, this plant is associated with the Mother of God. In Bulgaria, milk thistle is still called the gift of the Virgin Mary. And it should be noted that respectful attitude is fully justified!

The oil has immunomodulatory, anti-inflammatory, anti-fibrotic, antitumor effects (especially in bladder cancer and prostate carcinoma). It is a product of increased biological activity, irreplaceable higher fatty acids, flavonoids, vitamins (A, B, E, K, D, D), antioxidants, carotenoids. It is used to treat large wounds and burned areas of the skin. With an ulcer of the stomach, 12 duodenal ulcer, it regenerates damaged tissues, the walls of the stomach and intestines, promoting their healing. In case of diseases of the cardiovascular system, it relieves of bad cholesterol, nourishes the heart muscle, heals erosion of the cervix, well tightens cracks in the anus and helps get rid of hemorrhoids. The tocopherol contained in the oil has an antitumor effect and is a good prophylaxis against cancer, does not allow tissues to age, and has a powerful anti-aging effect.

This oil contains a special component, silibinin, which strengthens and regenerates liver cells. The second important substance, silymarin, increases the production of bile. Bile breaks down fats. In the blood, bile converts excess cholesterol into bile acids. The more cholesterol goes into bile acids, the easier it is for our vessels. When there is stagnation in the liver, hypertension and stroke are provoked. The more often we stimulate the release of bile, cleanse the bile streams, the better not only for digestion, but also for the hematopoietic system. Milk thistle oil affects the tissues that need it the most. It promotes the repair of damaged tissues and restores their ability to function normally.

Application for medicinal purposes: 1 teaspoon 2-3 times a day half an hour before meals.

Culinary uses: As a multivitamin method, milk thistle oil is actively used in cooking. When heated above 60 ° C, it loses a part of biologically active substances.

Certification: Organic standard, Euroleaf(meets the standards of the European Union for the production of organic products).