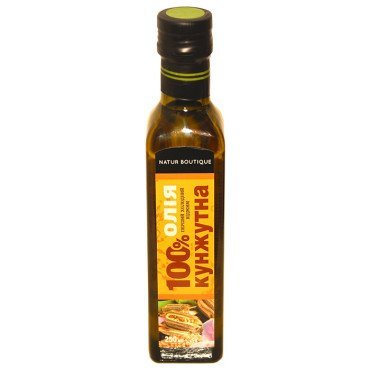 Unrefined and non-deodorized 100% sesame oil, produced by the method of the first cold pressing without admixture of other oils.

Useful properties: It is a source of minerals such as nickel and iron. It has a good effect on blood formation, has strong antioxidant properties. Sesame oil is a valuable source of calcium (100 g of seeds is equal to the daily intake of calcium).

Sesame seed is a seasoning known since ancient times. Sesame is also called sesame and, by the way, it is in this version that the name of the seasoning is used in the fairy tales "A Thousand and One Nights" as a magic spell. And this is not surprising, because sesame seeds and products made from them, in particular oil, have not only a pleasant taste, but also a lot of useful properties.

For example, in ancient Babylon, sesame was considered a symbol of immortality and food of the gods. The Egyptians called it the most useful spice, and the Assyrians were sure that before creating the world, the gods drank sesame wine. Sesame was consumed in the Middle East, India and ancient China.

Sesame oil is used in medicine, cooking and cosmetology. It can be used in its pure form, mixed with other oils and used as a base for aroma compositions, externally and internally. The methods of application differ depending on the purpose: bandages, lubricants, massages or masks.

In medicine, sesame oil is widely used due to its unique properties.

The calcium in sesame oil is good for the mouth - teeth and gums. To keep them healthy, you should rinse your mouth with sesame oil for 2-3 minutes while washing your face. Thus, the oil will not only strengthen the tooth enamel, but also disinfect the oral cavity.

If you take 1 teaspoon of sesame oil on an empty stomach, then in a few days the digestive system will normalize, and the metabolism will improve.

Mixing equal proportions of sesame oil and lemon juice, you get an excellent remedy for burns, ulcers and boils.

Rubbing your back and chest overnight with sesame seed oil heated in a water bath can cure colds and coughs; and taken inside warm oil will help with tonsillitis and pharyngitis.

Sesame oil can be used to treat ear inflammation by instilling it in 1-2 drops, slightly warmed up beforehand.

In cosmetology, this oil is used no less widely. For example, pure oil can be used as a night face cream, or you can add any amount to a store-bought cream. And not only in cream, but also in other cosmetics - lotions, milk, tonics, gels. And with pure, slightly warmed sesame seed oil, you can cleanse the skin, wash off makeup.

In cooking, sesame oil is used as a dressing for cereals and salads, for stewing and frying, and even for canning. It is believed that sesame oil is most advantageously combined with stewed vegetables. In addition, this oil will perfectly accentuate the taste of appetizers and seafood salads.

Contraindications: The only contraindication is individual intolerance to the components of sesame oil. Nevertheless, you should not abuse it, as excess calcium can lead to diseases of the urinary system. You should also not use sesame oil with aspirin and oxalic acid: in this case, insoluble compounds are formed in the body, which are deposited in the form of kidney stones.