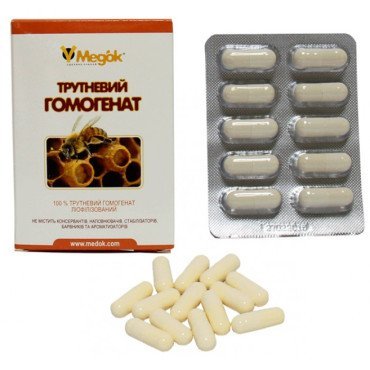 Male bee homogenate or, as it is also called, male bee milk in our country is considered a relatively new beekeeping product for use. But in fact, drone milk has been used as a remedy for a very long time. Recipes with its use, written on bamboo, were found in the tomb of Ma Vas Dui of the Han dynasty in Huan province (China).

In Japan, China, Romania and Kenya, the healing and nutritional properties of drone milk have long been appreciated. It is the basis of medicines, dietary supplements, cosmetics. And not only. Drone larvae are popular foods in Japan and China. They are fried, boiled, used as a seasoning, canned with soy sauce, packaged and sold. In terms of protein content, drone larvae are equated to meat and mushrooms, in addition, they contain a rich set of amino acids, vitamins, enzymes, and even surpass fish oil in vitamin D content.

What is a male bee homogenate?

Male bee homogenate and  male bee milk are two names for the same product. These are crushed male bee larvae of 7 days of age. Drone homogenate is a jelly-like mass of yellowish-mustard color with a sweetish taste. It quickly loses its properties at room temperature, therefore, various conservation methods are used for its long-term storage. Some of them, such as freezing or preserving with honey, have significant disadvantages. For example, frozen homogenate is problematic to transport; when thawed and re-frozen, it loses its properties. No more than 10% of drone homogenate can be added to honey, as the preparation may deteriorate. Therefore, it is necessary to take drone homogenate with honey in large quantities and it is not stored for long.

One of the best ways to preserve drone milk today is lyophilization. Lyophilization is one of the methods of drying food or biological products, and other moisture-containing objects, which are previously subjected to strong freezing, and then placed in a vacuum. Many medicinal preparations (enzyme, hormonal, vaccines, thrombin, etc.) are made by the lyophilization method. It is used for long-term storage of bacteria, fungi, viruses, medicinal biological products, plant and animal tissues. During lyophilization, the protein structure is not disturbed and the biological value of the product is preserved. Lyophilized drone milk does not lose its properties and can be stored at room temperature for two years.

Indications for the use of male bee homogenate:

- disturbances in the work of the endocrine system, dysfunctions of the thyroid gland;

- for children lagging behind in physical and mental development;

As a result of the use of male bee milk, the following is observed:

- stabilization of blood pressure, restoration of metabolism and tissue nutrition;

- regulation of the tone of the vascular system and the level of blood circulation;

- restoration of biochemical and massometric characteristics of testes and prostate gland, stimulation of the central mechanisms of regulation of androgen formation;

- restoration of the functions of the organs of the endocrine system;

Male bee homogenate contributes to an increase in energy potential and an increase in muscle mass in athletes. It increases the metabolic rate during the period of active muscular activity, thereby increasing physical endurance and performance. The strength capabilities of athletes increase, the quality and duration of training increases, and the recovery time is reduced. If you decide to buy a drone homogenate (drone milk), then it will be useful for you to know that for greater efficiency it is recommended to use drone milk together with bee bread, which ensures general recovery of the body.

Admission course for adults: 1 capsule 2-3 times a day 30 minutes before meals, dissolve the contents of the capsule well in the mouth, do not drink water. The course is 30 days.