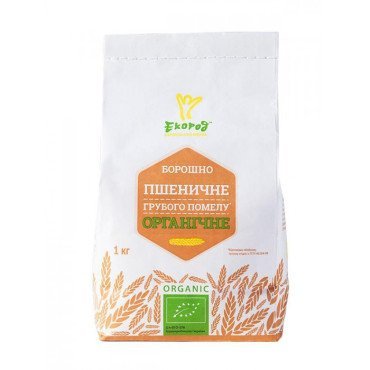 Organic Whole Wheat Flour is made from the whole grain of organic soft wheat, along with the shell (s) and germ. Due to this, such flour contains more vitamins, minerals and nutrients than ordinary wheat flour. Whole grain flour is a valuable product for a healthy diet.

Ash content is one of the main characteristics of such flour. It displays the mineral content that remains after the flour is burned (minerals do not burn). The lower the ash content, the whiter the flour. Coarse whole grain flour has a high ash content. for its production, whole grain is used together with a bran shell.

Protein content (9-15%), mainly glutenin and gliadin, is the second important characteristic of flour. The percentage of gliadin and glutenin determines the quality of the dough: glutenin gives it elasticity and stickiness, and thanks to gliadin, the dough stretches. Kneading the dough converts gliadin and glutenin, combined with water, into gluten, which forms a crumb. Roughly speaking, the higher the gluten content, the higher the strength of the flour. Bran particles in whole grain flour weaken the gluten structure, retain a lot of water, and although such flour contains a lot of proteins and nutrients, it is difficult to bake bread from such flour, since the dough is "weak". To avoid this, we recommend mixing wholemeal flour with premium flour at a ratio of 50%: 50% or 10%: 90%, respectively.

Organic whole wheat flour is great for baking bread in a bread maker.

Certification: Euroleaf (meets the standards of the European Union for the production of organic products).

Preheat oven to 180 degrees. In a large bowl, combine the quinoa, sugar, flour, baking soda and salt. In a small bowl, beat the melted coconut oil, eggs, yogurt, vanilla sugar with a mixer. While stirring constantly, slowly add liquid ingredients to dry ingredients. Stir well, add grated carrots and chopped roasted walnuts. Spread the dough evenly into the muffin tins, keeping in mind that it will rise almost 2 times in the oven. This makes an average of 16 muffins. Place the muffins in the oven for 20-25 minutes. You can determine the readiness by the golden brown crust or check with a toothpick, it should come out dry from the cake.

Pour water into the mold. Next, add flour so that it completely covers the water, pour salt and sugar into the corner. In the middle of the flour layer, make a small depression that does not reach the water level, and pour the yeast into it. Set the bread maker to "Whole Grain" setting, bread weight and desired crust color. Press the “Start” button and the healthy homemade bread will be ready soon.