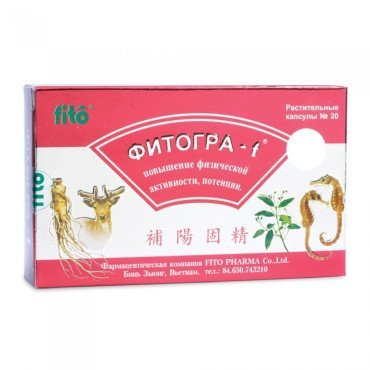 Potentotonic. Increases sexual, physical and intellectual performance. It is useful for the prevention of genitourinary diseases, sexual dysfunctions.

FITOGRA is a traditional remedy in the East, containing seahorse (caught by all means during the mating season), which has a pronounced positive effect on the kidneys and the genitourinary system. Eastern medicine explains these properties at the bioenergetic level by the presence of positive YAN (+) energy, which, when it enters the body, nourishes all organs and systems with it, stimulates all natural biochemical metabolic processes, while increasing endurance and physical strength. According to Eastern criteria, the drug fills organs and systems with positive energy, allowing a person to enjoy a healthy life and love.

In traditional oriental medicine, the classic FITOGRA recipe is used in combination:

Dosage and administration: 1-2 capsules 2-3 times a day 20-30 minutes before meals. The course of admission is 30 days.

Recommended to combine with:

Professor, Dr. med. D., head. Department of Gastroenterology of the Clinic of the Scientific Center for Radiation Medicine of the Academy of Medical Sciences of Ukraine
Komarenko D.I.

The object of the study: sick men with sexual neuroses who were treated in the department of gastroenterology, and who took part in the elimination of the consequences of the Chernobyl accident. In total, 20 patients aged 41 to 76 years and 20 persons from the same department - the control group - were examined. The duration of treatment in a hospital was 18-21 days. All patients in groups 2 received similar restorative treatment, and pharmacotherapy and diet therapy aimed at treating the pathology of the digestive system. In the main group, patients additionally received the product "Fitogra" 2 capsules 2 times a day.

Before the start of taking the drug, a questionnaire survey of patients in 2 groups was carried out on the questions according to table No. 1.

Characteristics of the clinical symptoms of the surveyed contingent of both groups before the start of treatment:

Dynamics of symptoms after a course of taking the product "Fitogra":

In most patients, the effect occurred in a day, but in 3 patients it was observed after 4-5 hours. After 7 days, a positive effect was observed in all patients.

Patients also noted an increase in energy and performance, a sense of self-confidence and an improvement in psycho-emotional status. Some patients with chronic prostatitis have reported improved urination and decreased frequency of urination at night.

The dynamics of recovery of the main indicators of sexual function in the "Fitogra" group:

Conducted clinical studies of the product have shown that "Fitogra" in the majority of patients examined in the clinic, who suffered from an accident at a nuclear power plant, provides restoration of impaired sexual function.

The product "Fitogra" restores libido and is an effective remedy for combating various symptoms and clinical manifestations of erectile dysfunction according to 7 main clinical symptoms, which is confirmed by reliable restoration of impaired sexual functions.

The product "Fitogra" is effective for patients of the studied age range from 41 to 74 years.

Studies have shown that the effect of the drug in a dose of 2 capsules 2 times a day in some patients may appear within 4-5 hours, however, a reliable onset of action is observed 24-48 hours after the start of taking the drug.

For patients of the older age group who have long breaks in intercourse, as well as for patients exposed to frequent and prolonged stressful situations, a course use of the product is recommended for at least 18 days.

For patients with complex sexual dysfunctions of sexual function, a 21-day course of treatment is recommended at a dose of 2 capsules 2 times a day.

Clinical studies of the "Fitogra" product manufactured by the pharmaceutical company FITO PHARMA Co., Ltd allow us to conclude that "Fitogra" is a highly effective means for restoring sexual function, working capacity and improving the quality of life of men of various age groups affected by ionizing radiation.