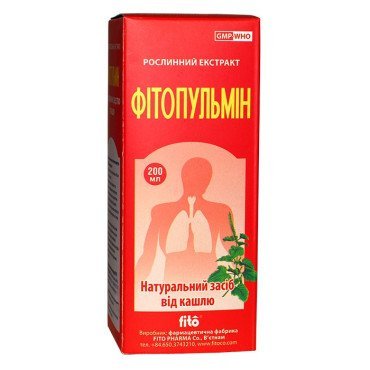 Natural cough suppressant. Recommended as an expectorant and anti-inflammatory agent for acute and chronic respiratory diseases. Strengthens the immune system.

The plants that make up the FITOPULMIN extract act in a complex way, complementing and potentiating the therapeutic effect of each other. Biologically active substances from them, in addition to the therapeutic effect, strengthen the entire body as a whole, increase immunity and are completely non-toxic at the same time.

Gorichnik roots contain glycoside, essential oils and have long been used in the East as an expectorant, mucolytic, analgesic, antipyretic, anti-inflammatory, enveloping agent.

The leaves and roots of the mulberry tree (mulberry tree) have a bactericidal effect, have diaphoretic and cough softening properties, and have a calming effect.

Common apricot fruits are a source of natural vitamins and minerals, natural acids and sugar, an antitussive agent.

In traditional oriental medicine, the classic FITOPULMIN formulation is recommended for prophylaxis, as well as an adjunct in the complex therapy of cough:

Recommended to combine with:

FITOPULMIN - PROTECTOR AGAINST COUGH AND COLD

Evaluation of the effectiveness of the use of the drug "Fitopulmin" in the complex treatment of patients with acute bronchopneumonia and pleuropneumonia was carried out.

The patients who were under observation were divided into two groups (the main group - 30 patients, the comparison group - 27). Patients of both groups received generally accepted standard therapy, in addition to this, patients of the main group were additionally prescribed "Fitopulmin" in the form of an aqueous extract of 15 ml 3 times a day for 14 days.

Examination of patients in the dynamics of the treatment made it possible to establish positive dynamics in both groups of both subjective and objective indicators. However, in the main group, whose patients received "Fitopulmin", the indicated symptoms were earlier and the process of "resolution" came faster and "softer". This is especially true for symptoms such as general weakness, fever, malaise, sleep disturbances, drowsiness, headache, both dry and wet coughs.

It should be noted the positive dynamics of indicators of the erythrocyte sedimentation rate, the number of leukocytes in both the main and the comparison group. Stable indicators of hemoglobin, erythrocytes, color index exclude the possible toxic effect of the treatment carried out both in the main and in the comparison group. Stable dynamics of blood biochemical parameters was observed in patients of both groups.
Patients who were operated on for cholelithiasis in complex therapy in order to improve the drainage function of the bronchi were prescribed "Fitopulmin" and the drainage bile was examined. According to the results of the study of these biochemical parameters of bile in postoperative patients, there were no reliable indicators indicating the effect on choleresis and the level of formation of bile acids.

Thus, based on the results of dynamic observation of patients with acute bronchopulmonary pathology, taking into account clinical and laboratory, instrumental research methods, which included "Fitopulmin" 15 ml 3 times a day in the complex therapy during the course of treatment, we came to the following conclusions: